The Association is reeling after one of the splashiest offseasons ever as superstars Paul George, Jimmy Butler, Chris Paul, Gordon Hayward all switched jerseys during the arms race of 2018.  Games aren’t won in the offseason, however, and sometimes the most important moves get overlooked.

This article discusses 5 teams that remain overlooked heading into 2018.

The Heat started last season sluggish at 11-30, then out of nowhere, got hot in the second half and finished 30-11 behind strong play from Goran Dragic and Hassan Whiteside.  Despite their coveted free agent Gordon Hayward going to Boston, the Heat have made solid offseason moves to jump up the Eastern ladder.  They took a gamble with their 14th pick, drafting 6 foot 9 big man Bam Adebayo.  So far, he’s looked like a strong low post threat and athletic rim runner as he’s averaged 17.5 points, 8.3 rebounds, and 2.3 blocks.

The Heat return their 98 million-dollar man, Hassan Whiteside, who will hopefully lead them to another strong defensive campaign. The Heat boasted a top 5 defensive rating at 104.1 and blocked the 3rd most shots in the league, mainly due to Whiteside’s strong defensive presence and 14.1 rebounds per game.

Management made a point of resigning journeymen Dion Waiters for 52 million and James Johnson for 60 million guaranteed, each for four years.  Dion Waiters had a career year, averaging 15.8 points per game and a career high 4.3 assists as he reinvented himself as a go-to scorer and playmaker.  Johnson was in the best shape of his life as he lost almost 40 lbs last year.  When asked about the Heat culture he answered, “It’s super real.  This culture is real.  Not only that, you know the kind of practices we have…we take care of that ourselves.”  Miami boasts an extremely proud culture that holds players accountable for keeping body fat low, and staying in gameshape.  The Heat also paid former Boston big man Kelly Olynyk 50 million for 4 years giving them another floor spacer, crafty finisher, and solid defender.

The Heat have a fantastic coach in Eric Spoelstra , a proven GM in Pat Riley, and a talented/young team team with chemistry.  A healthy Goran Dragic gives them a dynamic, playmaking point guard.  With the lower half of the Eastern Conference in flux for 2018, we fully expect Miami to make the leap into the playoffs.

The Kings have employed 5 head coaches in the last 4 years, and haven’t made the playoffs in 11 years. The Demarcus Cousins project crashed and burned, Rajon Rondo was awful, and Ben Mclemore has been extremely underwhelming.  This coming year the Kings finally have a young roster and some foundational pieces to be excited about.

GM Vlade Divac drafted promising rookies: lightning fast De’Aaron Fox who lit up March Madness, crafty scorer Justin Jackson, and 4 year college stud Frank Mason III.  Additionally, the Kings acquired veterans George Hill for 3 years 57 million, Zach Randolph for 2 years 24 million, and Vince Carter for 1 year 8 million.  George Hill, a 6’ 3” guard with a 6’ 9” wingspan, shoots 40% from 3 and defends at an extremely high level. Z’Bo and Vince Carter offer a scoring punch off the bench and quality veteran leadership to a young King’s team that NEEDS it.  Willie Cauley-Stein is a big body with a great motor, and Buddy Hield (featured on our U23 rankings) can shoot the shit out of it and should continue to work on becoming a go-to scorer in the league.

In a packed Western Conference, the Kings still have a ways to go but they now have an exciting team and a glimmer of hope in Sacramento.

On February 20th, 2017, ESPN’s Adrian Wojnarowski dropped one of his esteemed, “Woj Bomb”’ tweets indicating that the tumultuous Demarcus Cousins era in Sacramento was coming to an end. Cousins was traded to the New Orleans Pelicans during All Star Weekend for a package centered around Buddy Hield and a 2017 first round pick. This blockbuster trade gave the Pelicans another premier frontcourt player to pair with Anthony Davis.

The experiment is fascinating. In a league that is enamored with pace and space and small, positionless basketball, New Orleans bucked the trend and invested in two incredibly talented low-post threats in Davis and Cousins. This offseason is crucial as New Orleans is focused around the looming free agency of Demarcus Cousins in 2018 and Anthony Davis in 2021.  Year after year New Orleans has failed to put the right pieces next to Anthony Davis as injury-prone players like Tyreke Evans, Eric Gordon, and Ryan Anderson struggled to stay on the court.  Although he’s been good we think the Pelican’s overpaid their “point guard of the future” Jrue Holiday for 5 years 126 million.  One player to look out for is 20 year old Cheick Diallo, a 2nd round pick from Kansas as he showed some encouraging signs in his rookie year.

Ultimately, this comes down to whether Demarcus Cousins and Anthony Davis can play together.  We’re fairly optimistic as both players are capable of facing up, making plays off the dribble, spacing out to three, and making plays for their teammates. Head coach Alvin Gentry needs to get creative with his play-calling and tempo which could include a big to big pick and roll.

We only saw 18 games of the Boogie-Brow pairing last year, will they finally put it together in 2018? 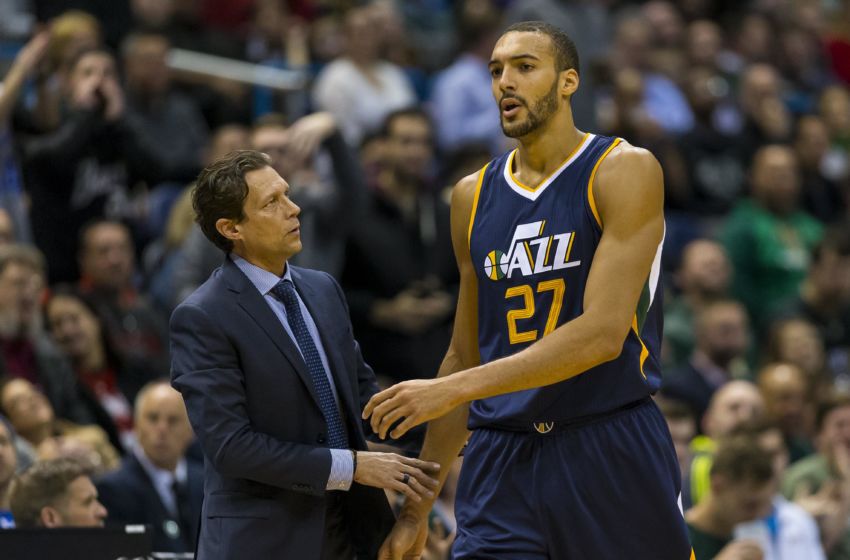 The Utah Jazz were dealt a crushing blow in free agency, losing their homegrown star Gordon Hayward to the Boston Celtics. Despite making it to the second round of the playoffs as the fifth seed last year, Hayward bolted to the Eastern Conference.  We still expect the Jazz to remain competitive, mainly due to their excellent coach Quin Snyder and two way force Rudy Gobert. Snyder has an excellent system that slows the pace down and makes the Jazz a difficult opponent, particularly at home.  Stifle Tower is a monster who continues to improve offensively while blocking everything in sight on the other end.  GM Dennis Lindsey traded a protected first for Ricky Rubio, traded up to 13 to select Louisville’s Donovan Mitchell, and signed an excellent wing defender and floor spacer in Thabo Sefolosha and Jonas Jerebko. Rubio is a polarizing player with limited range, superb passing, and inconsistent defense. Mitchell has shown great promise in the summer league and he looks ready to contribute on both ends of the floor. The Jazz certainly have enough pieces to make the playoffs but health will be a concern. Talented players like Derrick Favors, Rodney Hood, and Alec Burks have struggled to stay on the floor in recent years and the Jazz will need their production. One other player to watch is 22 year old Dante Exum, who has shown flashes of his lottery-pick potential. All in all, the Jazz are a gritty team we’re curious to see how they bounce back next year.

During his fantastic 2017 campaign, Kemba Walker was named an All-Star for the first time in his career. Unfortunately for the Hornets, Walker was the lone bright spot as they finished 11th in the Eastern Conference, with a 36-46 record. A variety of factors played a role in the Hornets missing the playoffs, as injuries to Cody Zeller and other members of their supporting cast challenged their depth.

Looking forward, we like the Hornets as a bounceback team to make the playoffs next season. Adding guard Malik Monk at 11th overall provides them with sharpshooting and elite athleticism at the off-guard position.

Charlotte made an interesting trade with the Atlanta Hawks for Dwight Howard, reuniting him with defensive guru Steve Clifford. Clifford was an assistant on Dwight’s Orlando Magic team that went to the NBA Finals in 2009 and he has coached an elite defense in Charlotte.

The Hornets, with a return to a top ten defense and improvements on offense, are an interesting team for 2018.