With the addition of the All Time NBA teams to NBA 2K18, hoop fans everywhere probably wondered what other fun rosters could be constructed with throwback squads.

Mid-major conferences such as the West Coast Conference are often overlooked for a variety of reasons, but let’s not forget the ultra talented players that have come from the WCC… 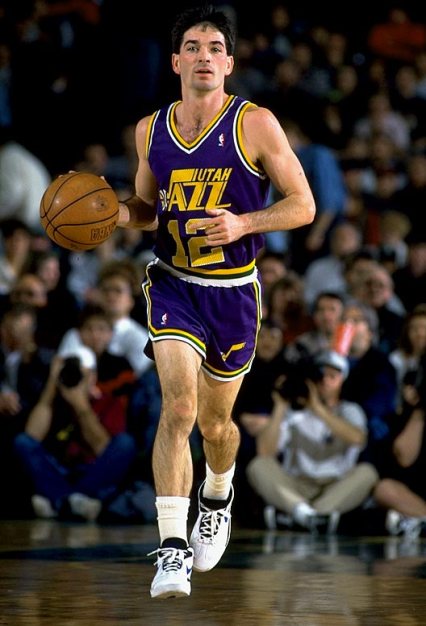 The starting point guard for our All Time team is Hall of Famer John Stockton. Over the course of his 19 seasons in the NBA Stockton was an absolute passing wizard, leading the NBA in assists 9 times.

In total, the 10 time All Star holds the NBA record with 15,806 assists. Stockton had an amazing career under the tutelage of Jerry Sloan, making the Finals twice with “The Mailman” Karl Malone. Stockton also holds the NBA record for steals, and he wasn’t afraid to go at players with his gritty style of play (he would fit perfectly on the ALL NBA Trash Talk Team.).

At Gonzaga, Stockton increased his scoring average each season, leading to a senior season that saw the Spokane product average 20.9 ppg. That effort was good enough for Stockton to be named WCC player of the year in 1983-84. At the time, the Bulldogs were not the program that they are today, despite John Stockton’s dominance. His senior season Gonzaga went 17-11, and finished with a 6-6 conference record, placing them 4th in the conference.

It’s pretty incredible that a player of Stockton’s caliber attended Gonzaga at the time, but Stockton put Spokane on the NBA radar in 1984. Drafted 16th overall, Stockton was part of a loaded draft that produced some dudes named Michael Jordan and Charles Barkley.

Doug Christie brings some needed defensive toughness to the ALL WCC team. In his 17 year NBA career spanning 7 different teams, Christie was named to an All Defensive team 4 times.Born and raised in the Seattle area, Doug Christie was drafted 17th by his hometown Sonics in the 1992 NBA draft. During his prime years, Christie was a starter on the early 2000’s Sacramento Kings, who made the Western Conference Finals featuring Mike Bibby, C-Webb, Vlade, and Peja.

While at Pepperdine, Christie won back to back WCC Player of the Year titles in 1991 and 1992. Christie took the Waves to consecutive NCAA tournament appearances in those same seasons, using his defensive prowess to average 2 steals and a block per game. Doug Christie led Pepperdine in scoring each of those seasons at 19 points a night as well, an indication of his two way ability.

While many Warrior fans could probably list the franchise’s retired numbers off the top of their hand, #14 may be the most commonly omitted number. Among the greats of Mullin, Barry, and Thurmond is Tom Meschery, a 6’6″ small forward from St. Mary’s.

Meschery was a member of the first Bay Area Warriors team, after the franchise relocated from Philadelphia in the 1962 season. That season Meschery put up solid numbers of 16 ppg and 9 rpg a game, chump change compared with his teammate Wilt Chamberlain’s 44ppg and 24rpg!

All in all, Meschery played with the Warriors through the 1967 season, a year that saw them lose in the NBA Finals to Chamberlain’s Philadelphia 76ers in 6 games.

The Russian Meschery averaged a double double in each of three seasons with the Gaels. His final season effort of 20ppg and 13rpg earned him player of the year honors in what was then the WCAC. Meschery didn’t have a ton of talent around him, the second leading scorer on the roster averaged 11 ppg that season. Saint Mary’s made the NCAA tournament and won a game in Meschery’s freshman year but failed to reach the postseason in his last two seasons.

Like so many others on this team, Kurt Rambis was the Player of the Year in his final season in the WCC. As a senior Rambis did it all, averaging 20 and 10 with a steal and a block a game as well. The 6’8″ forward’s individual success didn’t translate to the Broncos overall win loss record, finishing 13-14 and third in the conference.

After playing close to home at Santa Clara, Rambis was drafted 58th overall by the New York Knicks in 1980. Rambis never played with the Knicks, signing with the Los Angeles Lakers in 1981.

This was a wonderful career move for Rambis, who won four titles with the Lakers in 7 seasons. Rambis mainly came off the bench for the Showtime Lakers, and he averaged 17 minutes per game in Los Angeles. All in all, Rambis played 16 seasons in the NBA before retiring at 36 years old in 1994-1995. 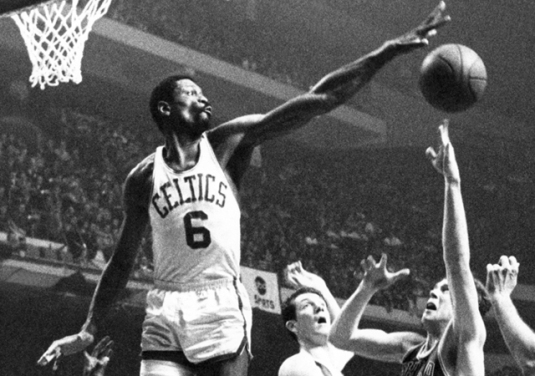 Holding down the middle for our team is Oakland’s own Bill Russell. If there is one thing Russell knows about, its championships. While with the Dons, Russell brought back to back titles to San Francisco in 1955 and 1956. The two time All American, Bill was an absolute monster while in the WCC, averaging twenty points and twenty rebounds.

Drafted second overall by the St. Louis Hawks, Russell was subsequently traded to the Boston Celtics for two All Stars and future Hall of Famers, Cliff Hagan and Ed Macauley.

A trade that changed the landscape of the league, Russell went on to experience massive success in Boston. Russell holds the record for the most championships ever, with 11. Yes, you read that right, 11 freaking championships!

Russell dominated from the outset in the NBA, averaging 20+ rebounds per game 10 seasons in a row. In those same 10 seasons, the 6’10″ center played north of 40 minutes a night, while providing excellent rim protection (blocks became an official stat in 1973). All in all, Russell’s defensive impact is why he has two hands worth of championship rings, and the starting center role on the ALL WCC team. 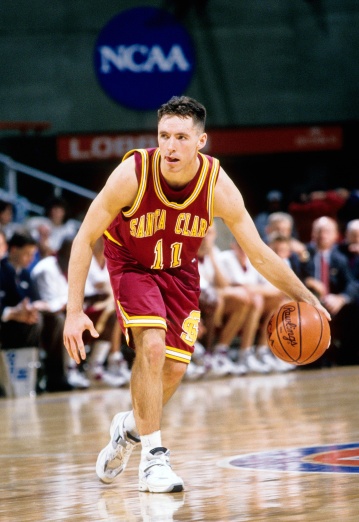 Our backup, a 2 time NBA MVP out of Santa Clara, finished his career third all time in assists behind Stockton and Jason Kidd. In 18 NBA seasons, Steve Nash was a master of creating offense. Nash averaged double digit assists 7 times, and in 5 of those seasons he led the NBA.

The best seasons of Nash’s career, his age 30 to 34 seasons, he led a high powered offense masterminded by Mike D’Antoni. The team played at a blistering pace, finishing first or second in offensive rating all four years.

With the Broncos, Nash was equally as impressive, winning the WCC Player of the Year in his junior and senior seasons. The Canadian Nash led Santa Clara to two WCC titles earning an appearance in the NCAA tournament, even upsetting a 2nd seeded Arizona team. Steve Nash is easily the best player to have come through Santa Clara, and he was sensational at both the professional and collegiate levels.

Interestingly enough, Bill Cartwright was an All Star in his rookie season after being the third overall pick in the 1979 draft by the New York Knicks. Cartwright certainly was worthy of the draft status based on his production in the WCC. The Player of the Year three consecutive seasons, Cartwright averaged 19 points and ten rebounds a game for USF.

Playing for his hometown Gonzaga Bulldogs, “The Stache” gave the Zags a highly efficient offensive season in 2005-2006, producing 28 ppg on 50/42/77. Morrison, in one of the most dominant college basketball seasons ever, split the Wooden Award with Duke’s sharpshooting JJ Reddick.

After an undefeated conference record, Gonzaga entered the postseason as a #3 seed where they beat Xavier (14) and Indiana (6). In the Sweet Sixteen, Gonzaga choked away a late lead against the national runner up UCLA, a team that put 5 players in the league.

The devastating loss will stick in fans heads because in the waning moments Morrison is shown bent over crying on the floor as his college career came to an end.

The viral video is the second most tragic moment on the Oracle Arena floor ever.

Morrison didn’t quite live up to his billing as the #3 overall pick by the Charlotte Hornets, playing two seasons there before being traded to the Lakers. After averaging a respectable 11 ppg in his rookie year, Morrison tore a ligament in his knee and missed the whole next season. He never really recovered, only playing 161 NBA games.While with the Lakers Adam Morrison won an NBA title in his final season in the NBA.

Known for his run and gun offense, Paul Westhead won an NBA title in his first season as a head coach with the Lakers. He fits the All Time WCC personnel because in that Lakers season he turned a dynamic point guard(Magic Johnson) and a dominant center (Kareem Abdul-Jabbar) into a champion.

Westhead later coached LMU from 1985-1990, using the same uptempo offense to lead the Lions to make the NCAA tournament and lead the NCAA in scoring three consecutive seasons.

A player at the University of Portland from 1988-1992, Spoelstra went undrafted and fizzled out as an NBA Player. Spoelstra however, is an awesome NBA coach, leading Miami to two titles during the “Heatles” era of 2011-2014. A coach who came up through the video room, Spo will bring that knowledge to the coaching staff and our players.

The list of accomplishments for Mark Few puts him in elite company in not only the WCC ranks, but also entire college basketball ranks. Few, the third fastest coach to 500 career wins, has the most WCC regular season wins, championships, and WCC tournament championships ever. Coach Few has been in the NCAA tournament 18 consecutive seasons, and Gonzaga trails only Kansas, North Carolina, Arizona, Duke and Michigan St for most consecutive appearances.