The NBA released the 8 contestants for the 2018 Three Point contest yesterday. This year’s field has some serious deep threats, and the nets in LA figure to be busy.

Over the 32 year history of the NBA’s 3pt. contest there have been many great winners but it’s time to decide the greatest three point contest shooter in league history.

Larry Legend takes on Mark Price in a sneaky first round match up. Bird, a member of the inaugural 3pt shootout, canned 22/30 from distance en route to the title in 1986. That same year Bird’s success at All star Weekend translated to the postseason as he won the NBA title.

After taking home the trophy in ’93, Price cashed in 24/30 en route to back to back titles. That 24/30 set the record for makes in a final, and the career 40% three point shooter appeared in four 3pt. shootouts.

The Cavs guard made two East All Star teams on top of his 3pt wins, but he falls short of Bird in the first round. 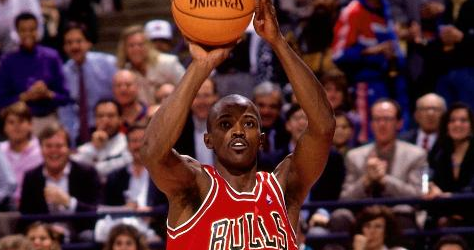 The 2/7 first round match up pairs 3pt. standout Hodges against Kapono, the only man to win with two different teams. Crowned in back to back seasons, Kapono lit up the 2007 Vegas nightlife with an impressive 24/30 from deep. Not to be outdone the next year Kapono sank 25/30 during ’08 All Star Festivities, breaking Price’s final round record.

The nod goes to Hodges here, as the Bulls guard has three career contest wins.

While Steph is the greatest from 23’9″ in history, he hasn’t had the success of Bird or Hodges in the 3pt. shootout. He faces off in the first round against Hornacek, a knockdown shooter and two time 3pt. champ. Hornacek, the current Knicks head coach, averaged 14 ppg for his career, and made 4 appearances in the shootout.

In an entertaining 3 pt. battle, Curry edges out Hornacek. 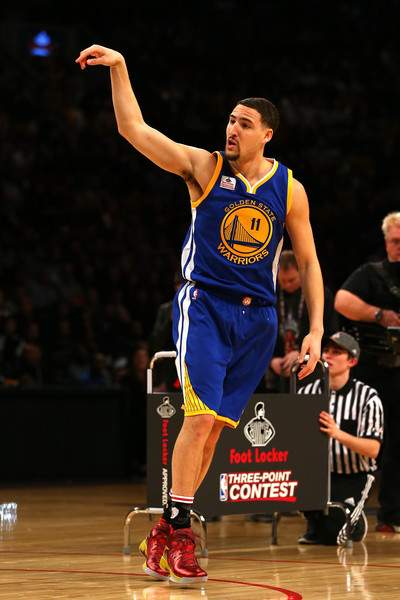 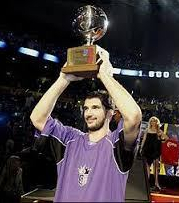 Klay’s elegant jump shot takes on a similarly spectacular stroke from Stojakovic. In what figures to be a matchup full of splashes, the Serbian Stojakovic will look to build on his back to back titles in ’03 and ’04. Peja had a flair for the dramatic in the 3pt. shootout with each of his wins coming in overtime.

Thompson gets the slight nod here, even with one career win, because Thompson put together a record-tying finals performance of 27/34. Klay is gunning for his second title in LA this year.

The second round slate begins with Larry and Klay dueling from deep. It’s a shame we don’t get to watch prime Bird during this era of the 3 pointer, because the Hall of Famer would have done just fine. Bird only attempted 1.9 3’s for his career, far behind the Splash Brother’s 6.9. In total, Thompson has made 1492 three pointers in 7 seasons compared with Bird’s 649 in 13 seasons.

Another doozy of a second round matchup matches Hodges against the Human Torch. Hodges set the record for most makes in a row (19!) in 1991, and he also appeared a record 8 times in the shootout. Curry is tied with Thompson for the most makes in a Finals at 27/34, but he has only been able to claim one three point contest win in 5 attempts.

Hodges and his three consecutive titles from 1990-92 advance past Curry and into the finals.

Winners of 6 of the first 7 three point contests, Bird and Hodges are titans in the 3pt. shootout. Hodges was an efficient shooter over the course of his career, shooting 40% from three and leading the league twice. Hodges has two career second place finishes, including one to Bird. Unfortunately for Hodges, he falls short to Bird once again.

Larry Bird is the best at many basketball things, and the three point shootout is one of them.