While I would like to think my dad and I have a chance against anyone in  2 on 2, evaluating the duos in NBA history has me thinking otherwise.

Assuming all players are in their prime, here are the Father/Son Power Rankings 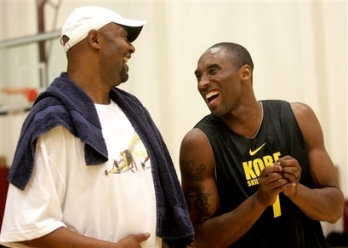 Unsurprisingly, Joe Bryant wasn’t able to achieve on the same level. Over the course of his 8 year NBA career “Jellybean” averaged 8pts and 4 rebounds. The Bryant tandem will be led by a heavy dose of Kobe in his peak bucket getting form, with a splash of Bean Bryant on the side.

The trio of Dell, Steph, and Seth will set the nets ablaze from range during this competition. The “starters” Dell and Steph have combined to make 3,340 of 7,908 (42.2%) from three point land. In Dell’s 10 seasons with the Charlotte Hornets he averaged 14 points per game, while being one of the league’s top marksmen from distance.

Should pops need a breather, Seth could slide in next to his brother and provide some additional scoring and playmaking. Seth had the best season of his career last season with the Dallas Mavericks, but he has been sidelined all season with injury. The Curry’s are obviously carried by the baby faced assassin, the two (and counting) time champ and MVP. There must be something about Ayesha’s cooking, because Steph is an elite offensive force.

The Thompson’s may have the most balanced roster in this competition, with the ability to score and defend all over the floor. While Klay will have his hands full with many of the perimeter scorers in this event, it won’t be easy against Klay’s phenomenal on-ball defense.

Behind him is Mychal Thompson, who at 6’11 will be able to protect the rim and clean the glass for the Thompson tandem. Offensively, the 28 year old Splash Brother is having the best shooting season of his career, leading the Association at 45.3% from three. He will be able to dump it down to his father, a low post threat who spent 7 seasons with the TrailBlazers before contributing to two title winners with the Lakers. 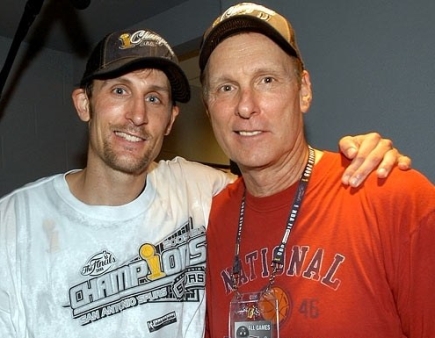 Unlike all the previous father son pairs, the Barry brigade will be carried by the old man- Hall of Famer Rick Barry. Rick will shoulder the scoring load, averaging 24.8 ppg over the course of his NBA and ABA career. Leading the Warrriors to a title is a common trait amongst the last three families, but Rick Barry was the only of the Dubs to take home Finals MVP.

Barry will have to call a few fouls out there because he was nearly automatic from the charity stripe, 4th in NBA history at 90%. The Barry pairing can turn to a few bench options, but the starting nod goes to Brent Barry – a 15 year NBA player. Brent had a successful stint in Seattle from 1999-2004 where he was excellent from three,including leading the NBA in 2001 at 47.6% . 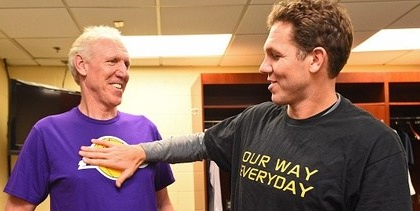 The one certainty with this group is that no duo will have more fun than the Waltons. Breeded in the Conference of Champions, prime Bill will command the key on both ends of the floor. A shot-blocking and rebounding force, the most confusing and unique college basketball announcer in America feasted on the low block.

An excellent passing big man, Bill figures to see some double teams as the opposition would opt to have Luke decide their fate. Luke played in the NBA for 11 seasons, but he was rarely a main contributor. The younger Walton will have to make plays, and I’m sure Coach Luke can draw up a few quality looks for pops during timeouts.

Walker was talented enough to be selected #1 overall by the Pistons in 1967. The 2x All Star was an effective scorer over the course of his 8 year career, finishing at 16.7 ppg. Rose was selected 13th by the Nuggets in 1994, developing into a 20 point per game scorer. The leap for Rose began when he won the Most Improved Player in 2000 with the Indiana Pacers.

As their draft status shows, both Walker and Rose were excellent college players. Rose was famously a member of the Fab Five, but Walker was magnificent in the NCAA. Playing for Providence, Walker averaged 30.4 points per game which was more than some guy named Kareem Abdul Jabbar.

As anyone who watched Sabonis play on ESPN while at Gonzaga surely knows, he is the son of Hall of Famer Arvydas. Domantas has taken a leap this season nearly averaging a double-double off the bench but he’ll need an even bigger one to follow in his father’s large footsteps. We have yet to see the best from the 21 year old Domantas, but given his promising situation in Indiana this duo could be rising the rankings.

Arvydas was a legend in international basketball before arriving to the NBA in 1995 at the age of 31. Sabonis has been described as, “He could do everything. He had the skills of Larry Bird and Pete Maravich. He had the athleticism of Kareem, and he could shoot the 3-point shot. He could pass and run the floor, dribble. ” Unfortunately he suffered injuries before he arrived to the NBA, but his most significant accomplishment is leading the Soviet Union to a gold medal in the 1988 Olympics. This is not only a large pairing, but a highly skilled one.

Kiki will have to carry this father/son squad, as Ernie played only 6 seasons in the NBA averaging 9 points and 4 rebounds. Kiki was drafted 11th out of UCLA, and he could fill it up early in his career. Spanning Kiki’s 4 seasons in Denver and 5 in Portland, Kiki averaged an efficient 23 points per game. That scoring punch will be crucial to the Vandeweghe team, as they aim to pull off some upsets. Kiki may be a little short on practice time currently, as he is serving as the Executive Vice President, Basketball Operations for the league.

The Stockton duo can distribute, but they lack the size to defend many teams above them. The elder Stockton is a Hall of Famer, a member of the Dream Team, and the starting point guard on the All Time WCC NBA Team. Prime John was perennially among the leaders in steals per game, which should give the Spokane products extra possessions to pull an upset.

David is one of the top players in the G League for the Reno Bighorns and part of the group that is aiming to qualify for the FIBA basketball World Cup. With David and other top G-League players lead by Coach Jeff Van Gundy, USA basketball qualifying should go better than USA soccer’s. All in all, it’s tough to see a pair of Zags so low, but the Stockton’s will be a tough out. 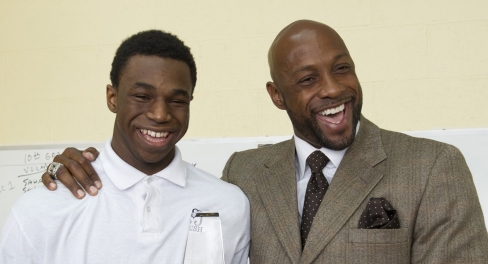 The Wiggins pairing will be carried as far as the high flying Andrew Wiggins can go. Mitchell  averaged a solid 10 points per game in only 20 minutes during his 389 career games. He battled a suspension for substance abuse in the middle of his career, and the shooting guard was out of the NBA at 32.

Meanwhile, the younger Wiggins is a talented scorer who will be a tough cover. Wiggins takes the second most shot attempts on the Wolves, but he hasn’t been efficient this season fitting in next to Jimmy Butler. Only 22, and inked to a max contract, it’s unclear whether Wiggins will reach his #1 pick potential. As is, he will be able to handle a large scoring load for his father/son team.